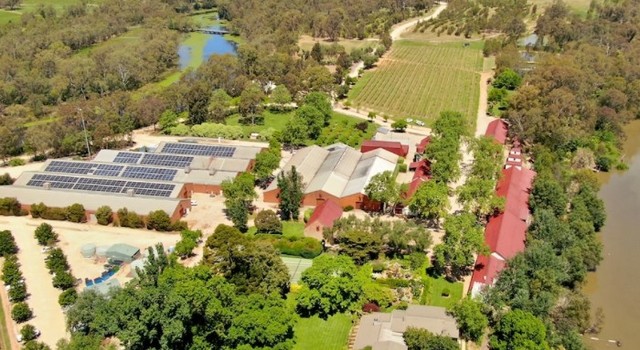 Tahbilk, on the banks of the of the Goulburn River in north-east Victoria, is one of the few vineyards in Australia to be certified as fully carbon neutral, ABC News reports.

The operation near Nagambie, where Hayley Purbrick’s family has been making wine for five generations, offsets all the carbon dioxide it creates.

The winery’s journey to becoming carbon neutral began in 1998, when trees were planted to revegetate the property, and in 2008 it undertook its first carbon audit to start looking at ways to lower its carbon footprint.

“It’s just the right thing to do,” Ms Purbrick said.

Over the past decade, the business has reduced carbon emissions by 45 per cent by using solar power, revegetating areas and using heat-reflective paint on its restaurant roof.

“They use it on rocket ships,” Ms Purbrick said.

“It’s a tin, round roof and it was just creating so much internal heat in summer, we had put in three gigantic air-conditioning units to keep it cool.

“When we didn’t have them on we had customers struggling with heat stress — it was like an immediate impact on the comfort as soon as we put the paint on.

Despite all of the technological development and environmental projects, Tahbilk still has to purchase credits to be carbon neutral.

But the business is not far off from being able to offset all of its carbon naturally.