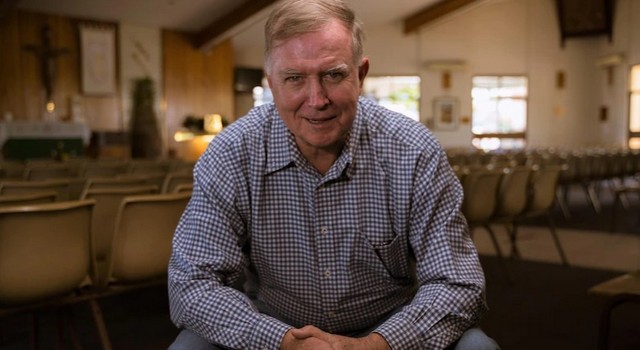 Priest with a purpose

Nine-year-old Kevin is tucking into a cup of Milo in the kitchen of Mount Isa’s youth hub. He’s also had a hot shower and bacon and eggs for breakfast.

He’s shrouded in his warm blue hoodie – he might live in Queensland, but he’s riding high on New South Wales’ win in the State of Origin the night before.

An enormous white-toothed grin appears as he talks of his favourite player, Josh Addo-Carr.

The youth hub is his second home.

He’s known as Father Mick and he is the figurehead — the person behind the youth hub, which sits on the grounds of the Good Shepherd Parish in Mount Isa.

This calm, softly spoken Catholic priest has made this mining town on Kalkadoon country his home for nearly 30 years.

After 20 years as a priest in parishes like Townsville and Ingham, he was sent west.

Suddenly he was surrounded by ranges and red dirt. The nearest ocean was hours to the north and large mining chimneys dominated the skyline.

He was thrust into a community of many different cultures, including a large Indigenous population, conducting funerals at which he was the only white person.

It didn’t take long for him to see a need.

People were lying in the churchyard and drinking.

A man who had started the parish kitchen providing free meals every day pointed it out.

“He said his daughter said to him in church, ‘What are they doing out there, Daddy? Who feeds them?’,” Father Mick recalled.

“You can’t have people living there and not do [something]. So that’s why we got hot water, showers, toilets, you know, all the things the basic things people need.”

He said helping people was about creating relationships and understanding.

“We’ve all got dignity because of who we are, whether in the riverbed or, you know, with the mayor, so to speak,” he said.