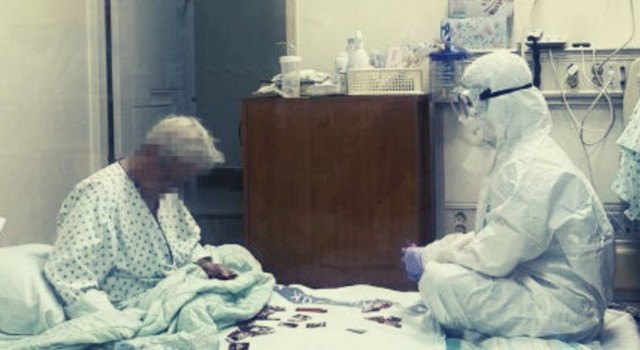 A heartwarming photo of a nurse wearing a full hazmat suit engrossed in a game of cards with a 93-year-old woman with Alzheimer’s disease has gone viral, HelloCare reports.

The older woman, whose surname is Park, was quarantined inside a negative pressure module at Sahmyook Medical Center, Seoul, last year while being treated for COVID-19.

In the photo, she is dressed in a simple blue-and-white nightgown, while her opponent º nurse Lee Su-ryan, who is 2 – is wearing a medical-grade hazmat suit, complete with goggles, gloves and face shield.

The two are engaged in the Korean card game, hwatu, which involves matching animals and flowers with the months of the year.

Last year, Park tested positive for COVID-19 at her nursing home and was sent to the negative pressure module for treatment.

Because Park is also living with Alzheimer’s, her stay was complicated, and she suffered severe symptoms, such as high fever and fatigue. She also struggled to cope with her loneliness.

Another nurse at the hospital where Park was being treated, Yang So-yeon, devised a plan to care for patients with Alzheimer’s who were forced to stay in the negative pressure module. She engaged patients with art therapy, including hwatu and painting.

Ten nurses, including Lee, took turns to keep Park company and also arranged video calls with her family to lift her spirits.

Last week, The Korean Nurses Association released the photo of Park and Lee, and since then the image has been retweeted more than 10,000 times and shared widely on social media.

“I feel in awe”: Why this photo of a nurse and a 93-year-old woman with dementia has gone viral (HelloCare)